Hi everyone! We hope you’re all enjoying the wonderful New England weather! Here at Kaleidoscope, we’re using the sun and the warmth to start cleaning and organizing our outside prop storage shed and we’ve begun making repairs and upgrades to our props and costumes! We’ve also already begun rehearsing for Sleeping Beauty and we start Aladdin this week!

In this issue:
RIC Tickets Now On Sale
Tickets are now officially on sale for our RI performances at Rhode Island College. This eight week series will run from July 7th – August 25th. With times being as difficult as they are, Kaleidoscope is offering the best “staycation” in town! Without buying expensive travel tickets, you can excite your child’s imagination by bringing them to see their favorite fairytale come to life on stage!

Sleeping Beauty
You can preview one of our summer shows, by visiting The Saugus Senior Center on Sunday, June 21st! “Sleeping Beauty” will begin at 2:00pm and the $12 admission includes a free ice cream!

New Summer Venue!
Kaleidoscope Theatre is proud to add the Hampton Beach Casino to our venue list this summer! We will be debuting “Cinderella” there on July 11th at 11:00am.

Strategies of Success contest!
Marianne Douglas (Fairy Godmother in “Cinderella”) is in the process of updating her successful high school curriculum “Strategies of Success” with the most current information prior to donating it to 300 high schools in North America this summer! With towns being strapped for money, Marianne thought that this was the ideal time to have a contest where schools can apply to win the program that has won so many awards and has changed thelives of so many teens! High schools can apply to win the program at www.strategiesofsuccess.com until July 2.

Congratulations, Rebekah!
At the recent Motif Magazine Awards, one of Kaleidoscope’s talented performers received an award! Rebekah Philip won for “Best Child Performance” for her portrayal of Little Red in our Little Red Riding Hood.

To read the complete newsletter, become a subscriber!
Posted by Kaleidoscope Theatre at 3:35 PM No comments:

Kaleidoscope would like to congratulate Rebekah Philip, who recently won a Motif Award for Best Child Performance for her portrayal of Little Red in Kaleidoscope's Little Red Riding Hood!
You can see Rebekah in that role on stage again this summer in August!
* Tuesday, August 11th at Rhode Island College, 11am
* Wednesday, August 12th at The Chevrolet Theatre in Wallingford, CT, 11am
Kaleidoscope is also proud of their other Motif nominees: Tommy Iafrate, Jeffrey Sewell, Nikki Speciale, and the cast and crew of Cinderella's Christmas. It was Kaleidoscope's first year being nominated and it's a testament to the talent of all those individuals that we received so many nominations this year.
Congratulations to all the winners and nominees!
(Photo: Presenters from Trinity and Perishable give Rebekah and Marisa (who was nominated for Encore's Grease) their awards!)
Posted by Kaleidoscope Theatre at 11:02 AM No comments:

Posted by Kaleidoscope Theatre at 4:19 PM No comments: 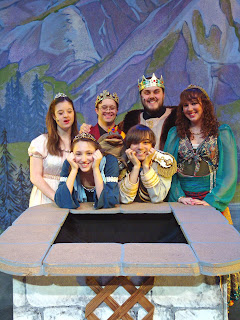 Kaleidoscope will be presenting The Frog Prince at the Saugus Senior Center on Sunday, May 10th! The show will begin at 2:00pm and the $12 admission includes an ice cream!

Moms get in FREE, so it is a wonderful Mother's Day activity for the whole family!
SYNOPSIS:
Splash! Young Prince Noble is having a really bad day - a smelly Gypsy woman is in love with him, he gets pushed down a well, and then he’s transformed into an icky green frog!
Now instead of traveling the land looking for a beautiful wife, he's short, green, and hoping to catch a fly for dinner!
Will Prince Noble learn a lesson in humility and win the lovely Princess Cassandra’s heart? Watch as plots twist, stories intertwine, and all the characters discover that Happy Endings can happen when you least expect them!
For more information on how to get tickets, check out our website!
(Photo: the cast of The Frog Prince from a recent performance.)
Posted by Kaleidoscope Theatre at 11:46 AM No comments: