Come join us for our final holiday performance! On Tuesday, December 23rd, Kaleidoscope will be performing Goldilocks' Christmas at the Orpheum Theatre. The show will begin at 11:00am and tickets can be purchased by calling (508) 543-ARTS!
Come with us on a delightful romp through the traditional tale of Goldilocks, as she drops in on the the three bears just in time for Christmas! Enjoy this festive twist of a classic fairytale, which teaches some lessons about proper manners in a fresh and fun way.
This is a show you just can't bear to miss!!
Posted by Kaleidoscope Theatre at 11:19 AM No comments:

Looking Through The Kaleidoscope #7: For Your Ears Only 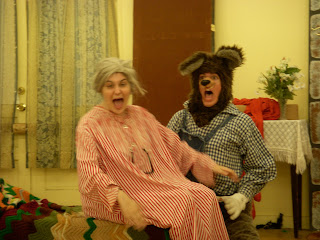 Happy holidays to the Kaleidoscope family and its friends. It's getting to be that time of year where families big and small come together, we all feel the chill of a New England winter, and David and Bobby migrate along with the geese. Yet Kaleidoscope doesn't really stop and this year I am starting to understand that first-hand. My experiences so far have been those of the summer touring, but now I am getting a glimpse of what happens when the weather isn't so hot.

I'm looking at my short-term calender and am realizing that I am lucky enough to be doing more with the company. I'm going to get to do Goldilocks for the very first time as the narrator, and if I am lucky I will be involved with B.U.L.L.Y, which would be my first non-fairy tale show at Kaleidoscope (not that I mind the fairy tales). I've seen B.U.L.L.Y once when I helped film a production of it about a year ago and it's a very different animal in theatrical terms. The interaction is very different with the kids; it is much more personal and there is a particular level of importance in getting the message out to them. I can see why David has such pride in that show and I hope my schedule works out.

But first things first. In the near future I will once again be playing the Huntsman in Little Red Riding Hood's Christmas for a school performance. For those of you who don't know, it's very much like the normal show except two numbers are different and we say "Christmas" a lot more. Looking towards the future and that performance, I remember the first time I was in Little Red.

I believe I mentioned before that I played the Huntsman last summer for one show in Connecticut. That show was particularly fun as I got to work with both my girlfriend and people I had gotten to know well through the company. Plus the shows at Chevrolet usually mean a character lunch, so there is that to look forward to. This particular lunch was interesting because some kids either recognized me from Snow White or had mistaken me from another show. Most of my responses involved a handsome twin.

What stuck out for me the most with that show was this idea that popped into my head while waiting backstage. Once I was done with my lines and such in the first act, I was able to wait backstage in one of the dressing rooms, where a monitor was set up and I could listen to the show. One of the first things that came to my mind was radio drama and that it would be extremely neat if Kaleidoscope did audio versions of their shows.

For those of you who don't know, I am a big fan of radio, particularly radio drama and dramatic readings. One of my favorite parts of the weekend is A Prairie Home Companion, a variety show that has been around thirty some-odd years and is hosted by Garrison Keillor, who also writes wonderful books as well as contributes to the Chicago Tribune. You may not know what he looks like, but his voice is one that clings to you. Along those same lines, one of my favorite television shows from the sixties has been given the audio treatment now and again, the result being sort of like a staged reading except there is linking narration throughout in order to fill in some gaps.

Kaleidoscope has ventured into audio before. You can usually find CDs of Cinderella at the concession stands for any show. Yet something made me think "wouldn't it be so neat to do a whole show on a CD?" I think it would be neat at least, as well as effective. Kaleidoscope fairy tales are pretty much based in the music, and I would think the music is part of the reason families keep coming back every summer. While seeing a Kaleidoscope show is bound to be special for any family, I would like to think listening to one can be just as wonderful. Maybe it is just me, but I know I would have a blast performing a show for radio. For something like this, though, I'd want to be a narrator for any of the shows. Again, it is just a fun idea that I am throwing out there, which anyone with significant pull in the company is free to steal from me. Just remember: linking narration.

As things begin to pick up for me, I'll be sure to fill you all in.

In the words of Garrison Keillor, "be well, do good work, and keep in touch."
Posted by Ryan at 11:41 PM No comments:

Cinderella's Christmas at RIC this Sunday!

Rhode Island College Alumnus, David Payton '77, the ExecutiveDirector of Kaleidoscope Theatre, says, "We have been so verylucky to have such excellent performers touring with us who areeither RIC students or graduates. The terrific theatre education we all received at RIC has come in handy time and time again." This year students from the theatre program at RIC will be performing in Cinderella's Christmas! This show will actually be performed at Rhode Island College as part of the show's New England tour!
Kaleidoscope Theatre will present Cinderella's Christmas at Roberts Hall on Sunday, December 14th at 2:00pm. RIC graduates and undergraduates who will participate include: Mike Daniels '09 as the Minister, Rob Ferland '05 as theTechnical Director, Nicole Frechette '06 as the Production Manager, Tommy Iafrate '05 as the Director, Christine Redihan '12 as the stage manager, and Jillian Rivers-Keegan '09 as the beautiful Cinderella.

Many of these students have been active in Kaleidoscope for a number of years; Rob Ferland has been the Technical Director for the company for ten years! Others are joining the company for their first Christmas tour. Mike Daniels '09 joined the company this summer and is looking forward to continued involvement: "When I joined Kaleidoscope, it was a real treat to get toperform professionally with good friends from my actingclasses. I immediately felt right at home."
The company is like a second family for many of the people involved. Here's how one of Kaleidoscope's performers (Ryan Hanley, a RIC graduatestudent) described it: "Once in a while, you find a place like Kaleidoscope and you can be a part of a greater thing –something that surpasses the standing ovations and autograph lines. It is the ability to become a family and the ability to keep people in your heart for years to come. For those of you fortunate enough to become a member of this family, no matter what happens, remember that you can come home anytime."
Kaleidoscope's family includes all their performers,technicians, and of course, their audience! Come join our family to celebrate the holidays this year!
The show's final performance this season will be on Sunday, December 14th at Rhode Island College. The show is at 2:00pm.To reserve your tickets, please call the RIC Box Office at (401) 456-8144. Tickets are $10 in advance and $12 at the door.
Posted by Kaleidoscope Theatre at 8:29 PM No comments:

Come check out Hansel & Gretel this Thursday at Scottish Rites Auditorium in Cranston, RI! The show starts at 10:00am and features many local performers! To reserve tickets, please call Kaleidoscope Theatre at (401) 942-3637.
Plot summary: When Hansel & Gretel go for a walk in the woods, they discover every child's dream - a house made entirely of candy! But when the house's owner, a silly witch named Grumpella Finklestink, discovers them, delight could turn into disaster...
Photo (from left to right): Mama (Meredyth Waterman), Papa (Mike Daniels), Gretel (Nikki Speciale), Hansel (Steven Dinobile), Misery (Tommy Iafrate), and Grumpella Finklestink (Lee Rush).
Posted by Kaleidoscope Theatre at 3:18 PM No comments:

Cinderella on the radio!!


Two songs from Kaleidoscope's production of Cinderella's Christmas will be featured on the radio this weekend! To hear the two catchy Christmas songs, tune in to WNRI (1380AM) this Saturday at 4:00pm and Sunday at 6:00pm. You can also check them out online!
Remember, if you'd like to see Cinderella's Christmas performed live onstage, come to our upcoming performance at Rhode Island College on Sunday, December 14th at 2:00pm! To reserve your tickets, call the RIC Box Office at (401) 456-8144!
Posted by Kaleidoscope Theatre at 7:17 PM No comments:

Please note that the kaleidoscope@kaleidoscopetheatre.com account does not seem to be working! If you've sent any email to us in the last 5 days, and have not gotten a response, please resend your message to either kaleidoscope1977@gmail.com or kaleidoscopethtr@gmail.com

THANK YOU!!
Posted by Kaleidoscope Theatre at 3:26 PM No comments: