Kaleidoscope's favorite scenic painter/designer has a new website! Laura McPherson has been working with Kaleidoscope Theatre for the last several years on all our new backdrops. She redesigned and repaired the Sesseman Home and designed a new mountain drop for Heidi in 2005. This past summer, she led a group of Kaleidoscope volunteers in painting a new house drop for Cinderella!
With the help of RISCA, Kaleidoscope hopes to collaborate with Laura again this year to design and create new drops for our planned remounting of Aladdin for the Summer 2009 tour! Stay tuned for more information!
(Photo: Laura and the Kaleidoscope painting volunteers!)
Posted by Kaleidoscope Theatre at 10:22 AM No comments:

This past weekend, one of Kaleidoscope’s most cherished friends passed away after a long battle with cancer.
Larry Gower, the husband of Debbie Gower (Evil Queen in Snow White and Dumdora in Rapunzel), was always willing to go the extra mile to help Kaleidoscope. He often toured with Debbie and would volunteer to help with the sets and props. He was an accomplished performer in his own right and he frequently accompanied Debbie on the piano. His beautiful playing and his beautiful smile will be sorely missed.
The wake will be held this Wednesday, October 22nd from 4:00-8:00pm at the J.J. Duffy Funeral Home, 757 Mendon Rd Cumberland, RI. The funeral service will be held the following Thursday at 9:00am at St. John Vianney 3609 Diamond Hill Rd, Cumberland, RI.
In lieu of flowers, donations may be made in his memory to the Home and Hospice Care of RI, 169 George Street, Pawtucket, RI 02860. For more information, click here.
(Photo: Larry, David, and Debbie at Kaleidoscope's 30th Reunion, October 27, 2007.)
Posted by Kaleidoscope Theatre at 8:10 PM No comments:

Looking Through The Kaleidoscope #5: I Suppose You Can Call It Typecasting 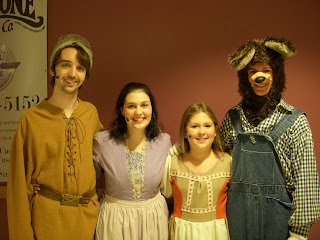 It has been quite some time since I have made a post on the blog, for which I apologize. Things have been extremely busy as of late. But seeing that the newsletter mentioned the blog, I figured I should oblige again. I wouldn't want to newsletter to be accused of libel.

For me, I had expected certain things to happen with Kaleidoscope. My main expectation was that I was going to play The Huntsman again for Snow White, which I did. I relatively try and keep modest when it comes to theatre and think of every new show, even one I've done before, as a clean slate, meaning I was prepared for the idea that someone else might play The Huntsman instead. However I did have assurance from others that I would get to rejoin the cast and I was happy to do so.

For those of you who may have only done a particular show for one run with Kaleidoscope, getting to do a second run has a particularly good feeling. Because of the atmosphere that this particular theatre company already creates, going in to revisit a show with familiar faces is extremely welcoming. The first rehearsals usually begin with enthusiastic greetings between people who haven't seen each other since last summer. In my case, these greetings were with a great deal of children, who seem to have grown in one way or another since the summer before. I see certain faces and think of how glad I am that they are part of the show again and hope that they could stay small forever. However I think the parents would protest to that last part. Otherwise when would they move out? Never the less, seeing a familiar cast is always special. The rehearsals also run pretty smoothly because, as I said before, doing a Kaleidoscope show is a lot like riding a bike: you do it once and then you never really forget.

As I stated, I had certain expectations for the summer with Kaleidoscope. I expected to go to certain venues, my particular favorite being Melody Tent. I expected experiencing the fury of a character lunch and lots of time in a van. What I didn't expect, however, was to do another show.

I was told by Jamie that the company was looking for someone to perform in Little Red Riding Hood playing, surprise, The Huntsman. I figured "how different can one huntsman be from another?" Turns out there is quite a difference between the two, particularly that The Huntsman sings in Little Red. My gut reaction was that this could pose a problem. But at the same time, I sang at my first audition, I can try again at this next one.

For the second time, I made my way down to Kaleidoscope's office and was about to audition for a new part. I never would have guessed that this would be the easiest audition of my life thus far. I kid you not. I'm not saying it was due to this Broadway-caliber barrage of talent practically glowing out of my being, especially since that factor of myself doesn't exist. It was David who made this audition easy and he was only there for a total of seven seconds.

Jamie and I were going over The Huntsman's song a few times in preparation for David to get there and officially hold the audition. David came in while I was in the middle of singing, said "I didn't know you could sing...OK, you've got the part" and proceeded to leave. That was it. I didn't even know I could sing, but if David said I could who was I to argue? The man runs the company, for pete's sake! Don't hassle him about your insecurities of your own talent. He's got bigger fish to fry.

So for two times this summer I would play The Huntsman, albeit for only one other performance. That story will be for next time, plus how a monitor can cause sudden bursts of inspiration.

In the words of Garrison Keillor, "be well, do good work, and keep in touch."
Posted by Ryan at 2:25 PM No comments: