Kaleidoscope Theatre will be continuing our monthly series of fairytales at Saugus Senior Center this fall!

We hope you can join us!
Posted by Kaleidoscope Theatre at 3:34 PM No comments:

Remember that $100-off scool-touring coupons can only be picked up at our summer concession stand! We have only two summer performances left!

* Goldilocks at South Shore Music Circus, 8/20 at 10:30am
* Goldilocks at Rhode Island College, 8/25 at 11:00am
These coupons are good for $100 off any of our school-touring productions. Simply pick up a coupon and give it to your child's principal or PTO president so they can book a show for the 2009-2010 school year for a $100 discount! (Show dates must be reserved by October 15th.) If you have any questions, please call our office at (401) 942-3637.
Shows available to tour to schools include:
* BULLY
* I’m Special, You’re Special
* Goldilocks & the Three Bears
* Little Red Riding Hood
Pick up your coupon today!!
Posted by Kaleidoscope Theatre at 7:06 PM No comments:

Kaleidoscope Theatre will be at the YMCA Family Fun Day on August 28th from 6-8pm! This event is part of the Pawtucket Arts Festival and Kaleidoscope Theatre will have a table set up with information about our award-winning school-touring programs and our upcoming public performances! Snow White and Cinderella will also be appearing and will be happy to sign autographs and take photos with the kids!

We hope you can join us for such a fun event!

Posted by Kaleidoscope Theatre at 3:02 PM No comments:

This Week at RIC - Little Red!

On August 11th, 2009 at Robert’s Hall Auditorium on the Rhode Island College Campus, Providence, RI, Kaleidoscope Theatre will perform the musical production LITTLE RED RIDING HOOD! Showtime is 11:00am and admission is $8 in advance and $10 on the day of the performance. For tickets and more information, please call the RIC Box Office (Open Monday through Friday from 10:00 am to 4:00 pm) at (401) 456-8144. This presentation of the famous fairytale is an original musical adaptation by David G. Payton of Cranston, RI, and is filled with all the wonderful characters audiences have come to know and love. For further information, please contact Kaleidoscope Theatre at (401) 942-3637.
Kaleidoscope Theatre's LITTLE RED RIDING HOOD is an original musical written by David G. Payton of Cranston, RI, the Executive Director of Kaleidoscope Theatre. Little Red Riding Hood and her Mother live a quiet life together in the woods, but unfortunately for them, the devious Big Bad Wolf is about to disrupt their cozy lifestyle. The handsome, conniving, and hungry Wolf sets out to eat Little Red, her sick Granny, and all of Little Red’s goodies. Unfortunately for the Wolf, Little Red’s cold-stricken Granny is more interested in marrying the wolf than running away from him. In Kaleidoscope’s adaptation of LITTLE RED RIDING HOOD, you’ll find that Granny’s a dilly, Wolfy’s quite silly, Red’s mother who shares, a Huntsman who cares, and a little girl all dressed in red come to life from the book you once read. It is full of songs, dance and loads of laughs for everyone plus audience participation and involvement which make this a show the whole family won't want to miss! So come along with Little Red as she tries to get to Granny's before the Big Bad Wolf.
Cast members are Little Red (Rebekah Philip of Rehoboth, MA), her Mother and Granny (Jamie Dellorco of Franklin, MA), the Huntsman (Cameron Marcotte of Scituate, RI) and The Big Bad Wolf (Ryan Hanley of Cranston, RI). Director is David Payton of Cranston, RI; Costume and Scenic Design are by Robert Zannini of Cranston, RI; Stage Manager is Christine Redihan of Providence, RI; and Sound Engineer is Nicole Frechette of Lincoln, RI.
Posted by Kaleidoscope Theatre at 6:21 PM No comments:

Looking Through The Kaleidoscope #11: What Did You Expect? They're Owned By GM... 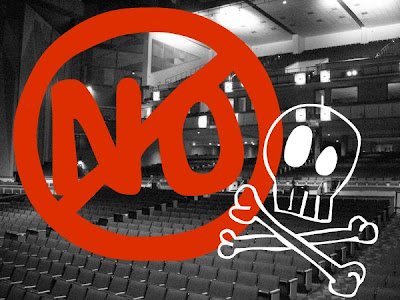 Sorry it took so long between this post and the last one. Once again, time got away from me, as it does with many of us.

As I mentioned last time, this blog would be about the Chevrolet Center in CT. First, a little background. So as they say in Lee Falk's The Phantom, "for those who came in late..."

If you haven't been to the Chevy, it's huge. The theater itself seats somewhere in the realm of 6,000, and in addition there are two room used for our "character lunches", where all of the actors meet with the audience and sign posters as they have lunch. In most cases, it's a bigger than any other performance we do. That is, it was.
This summer, we only did one show at the Chevy. The economy has hit the place hard, as it has other venues, and the theater cancelled the rest of our season. Just like that, we were gone. There are two main reasons for this, which go hand in hand:

Chevy is a union theater, meaning that they have a lot of people they have to make sure get paid no matter what. From an actor's point of view, it means that someone else will put your costumes in place, install the drops, and put the set in place. Spill something and you are likely to hear "DON'T TOUCH THAT!"

Here's where the other hand comes in. Being so huge, Chevy has to fill as much of the theater as they can in order to make a profit. So while 2,000 people in the audience is great for a performer, it's not so great for a venue like Chevy. Because of the economy, it's harder to fill seats. Not to mention that most of Kaleidoscope's audience was comprised of summer camps, which were extremely beneficial for everyone. We got our audience and Chevy got its profit. But there are less camps this year because of (DA-DADA-DA!) the economy.

There is a little more to this that I hesitate to go into...
But I will!

Many people were upset by this. Kaleidoscope had received many calls from people hoping to see our shows at Chevy, none of them good. They have ranged from "we were looking forward to this" to "well, if you cancel there, who is to say you won't cancel with us?" Let me assure you all that we did not cancel the season. We, in fact, were willing to do just about anything to at least save part of the season. Yet people were under the impression that we were the ones that pulled the plug, when in fact it was another party I am not sure I should mention (hint: vroom vroom).
Now, this experience got me wondering: how would the fairy tale worlds that we portray handle such a situation? With that, I present: 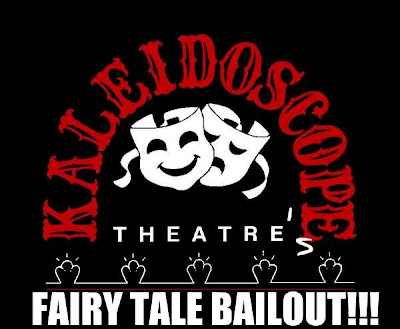 So what would the fairy tales of this summer's season do in such an economic crisis? Here are my theories (for your consideration, additional references have been added thanks to Wikipedia):

Snow White - This is an easy one: layoffs. That way when I ask if everyone is ready for "Snow White and the Three Dwarfs", I'm not lying.

Cinderella - The Fairy Godmother can only afford to give Cinderella a fiberglass slipper.

Beauty & the Beast - These people are already down on their luck...but things get worse when the Beast cannot let Belle live in luxury and wear fine clothes. All he can offer is a "My Dad Stole a Flower, Made Me Live With This Furball, and All I Got Was This Lousy T-Shirt" shirt.

The Frog Prince - You think we can afford to give such nobility to a frog?!? Bring on "The Frog Duke".

Aladdin - I know what you are thinking: there's a Genie that can fix it all. Right? WRONG! With everyone cutting corners, there is now a 10 rupee surcharge with every wish.

Goldilocks & the Three Bears - If no one can afford a house lately, bears certainly can't.

Little Red Riding Hood - We've already got one sponsor plug ("Oooh, Neiman Marcus"), so let's get in some more.

"Now, go straight to Granny's house to give her the Pepto-Bismol, for her nausea, heartburn, indigestion, upset stomach, and diarrhea."

Sleeping Beauty - Naturally, the spinning wheel will be made by IKEA. And what is this Party of the Year business? You think that we can put together a celebration so great that it will be better than anything else that year? We can't afford such gusto. Music, please!

Those shows should do just fine, right?

In the words of Garrison Keillor, "be well, do good work, and keep in touch."
Posted by Ryan at 1:32 PM 2 comments: