Looking Through The Kaleidoscope #1: How Singing "Happy Birthday" Will Get You A Job In Theatre 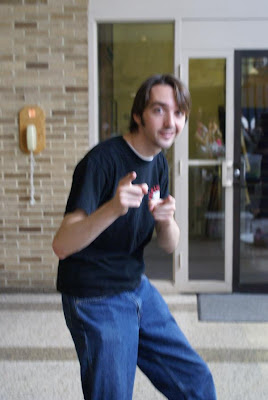 Hello all. This is Ryan and if you read the Kaleido-News lately, then you know what I am doing on this blog. If you don't know what I am doing here, Kaleidoscope was nice enough to make me a contributor for the blogs and I am using the opportunity to write entries about summer experiences as an actor for the company. I thank Nikki and Mia for giving me the inspiration for this.

While this summer has come to a close and these experiences won't necessarily by "live", I am hoping my memory will serve me well and I can reflect on the past two summers with the company. One thing I certainly remember well is how I got started with Kaleidoscope.

While I realize now that I had seen Kaleidoscope shows when I was a young child, I was formally introduced to the theater in 2007 by Jamie Dellorco, who most people know by now is my girlfriend. Before I go on, I want to stress that Kaleidoscope does offer auditions on a regular basis and you are not required to take anyone out to dinner and a movie in order to work with them. Whether that will improve your chances or not, I don't know.

Nevertheless, I had come to learn that Jamie had worked with Kaleidoscope for some time now. Jamie told me, and I say this at the risk of embarrassing her, that children's theatre, specifically Kaleidoscope, helped keep her involved with the arts and acting. She had been starting to stray from the stage until she worked with children and realized that this was what she wanted to do. No matter what kind of ups and downs she would face, Jamie could always call Kaleidoscope her home.

Jamie knew that they needed someone for a dinner theatre show, Dial M for Matrimony, and possibly a Huntsman for Snow White during the summer season. She suggested and encouraged me to audition. There was one thing, however, that I knew would get in the way of a successful audition: I did not sing. Kaleidoscope is a place of music. Music plays such a vital role in all of their productions. What would they do with a non-singing, out-of-college actor? What would anybody do with a non-singing, out-of-college actor? Seriously. Not only did I not sing but I had no kind of vocal training at all. Doing children's theatre for a summer seemed like fun, but to me the likelihood didn't seem high. Jamie assured me, however, that if I did Snow White that I would not have to sing as The Huntsman. In the end, I decided to give it a shot.

The fateful night of the audition I met David Payton for the first time, who was very polite in greeting me. We made our way into the performance space and got right down to business. As my luck would have it, David asked me to sing. My song: "Happy Birthday". It's one of those songs that you just sing without thinking about it. It's something ingrained in the brains of every individual. It's some person's birthday, so you sing. I gave the song a shot and David said, to my surprise, that it didn't sound too bad. Didn't sound bad? This can't be. Hanleys don't sing. It's a rule. But that's what David said. He suggested I try and listen to myself more when I sing. I tried again, this time attempting to make an effort to listen to my own voice, which isn't easy for a non-singer. But David thought I did better the second time around. If he's happy, I'm happy. I was then asked to read a portion of Dial M for Matrimony. With this I was more comfortable and had a great time coming up with voices for the characters. Eventually, I was offered the part of Pasqualie/Peccarino in Dial M for Matrimony.

I'm not posting this to gloat, I assure you. Modesty is an important policy all people should keep. Besides, I still don't think I can sing. In any case, I have come to realize that even in a theater full of musicals, there is a place for someone who is musically illiterate. No matter what you think a theater is looking for, there is no reason not to give it a try. For all you know, it might end up that they were looking for you.

Next time, I would like to share my first show experiences with you if you would be so kind to read them.

In the words of Garrison Keillor, "Be well, do good work, and keep in touch".
Posted by Ryan at 1:19 PM 1 comment:

Kaleidoscope Theatre would like to thank you all for a wonderful summer! Our audiences were more enthusiastic than ever and we really do appreciate it!

Remember, if you picked up a $100 off coupon at our concession stand, please call us about it before the October 15th deadline! If your child enjoyed our shows and would be interested in having one of our characters come to their birthday party or other special event, please contact us at kaleidoscope@kaleidoscopetheatre.com!

We already have some Fall/Winter shows booked (and more are on the way)! Here is our schedule so far...
* November 29th - December 1st = Hansel & Gretel at The Kelsey Theatre, MCCC in New Jersey

Hope to see you all there!
:)
Posted by Kaleidoscope Theatre at 1:29 PM No comments: 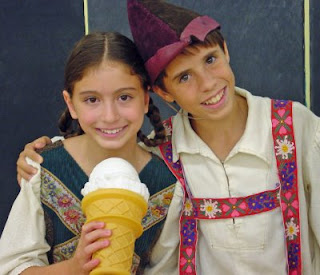 We've now reached the end of the 2008 Summer Tour! Kaleidoscope has had a wonderful season, and we hope you've all enjoyed our performances! Our last show of the summer is Hansel & Gretel! When Hansel and Gretel go for a walk in the woods, they stumble upon every child's dream: a house made entirely of candy! But when the house's owner, a silly witch named Grumpella Finklestink, discovers them, delight could turn into disaster...
Come join Hansel and Gretel on their adventure and help Kaleidoscope Theatre celebrate a wonderful summer season!
This Week's schedule:
Tuesday, August 26th
11:00am at Rhode Island College
Wednesday, August 27th
11:00am at The Cape Cod Melody Tent
Thursday, August 28th
10:30am at The South Shore Music Circus
Posted by Kaleidoscope Theatre at 5:21 PM No comments:

Is it really possible? That's what the Miller boasts about his daughter to the greedy Queen... but what happens when the Queen orders the Miller's daughter to spin some gold, or else. Come find out as Kaleidoscope Theatre presents RUMPELSTILTSKIN! Remember that name... you never know when it might come in Handy!

Also this week, Kaleidoscope will be presenting the final show of the summer at the Chevrolet Theatre in Wallingford, CT. Come join LITTLE RED RIDINGHOOD on her adventure in the woods! This last performance of the 2008 Summer Series at the Chevrolet will be on Wednesday, August 20th at 11:00am. We hope you can join us!

:)
Posted by Kaleidoscope Theatre at 5:19 PM No comments:

Everybody FREEZE! Come see "Rapunzel" this week at RIC!

Next week is the summer debut of Rumpelstiltskin! Stay Tuned!

Posted by Kaleidoscope Theatre at 7:07 PM No comments: 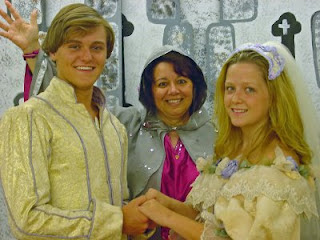 Everyone is invited to the social event of the summer - Cinderella's Wedding!

Join Cinderella and all your other favorite characters for the sequel to Kaleidoscope Theatre's beloved Cinderella. This fun-filled show picks up right where the original left off! Cinderella's excitement over her upcoming wedding to the Prince is soon overshadowed by the sudden appearance of the Spanish Ambassador with an ancient document betrothing the Princess of Spain to Prince Charming. But where does that leave Cinderella? Is Spain really involved, or are Stepmother and the Stepsisters scheming again? With exciting new music and amazing dance numbers, Cinderella, Too! will be a ton of fun for everyone!

************************************
Also debuting this week is Rapunzel!
Rapunzel is a magical musical based upon the famous fairytale where a young girl is kept in a tower by a comical and bumbling witch and the only way in is by climbing Rapunzel's beautiful and extremely long hair. This enchanting adaptation closely follows the classic and timeless tale we all know and love. Lovely and lively songs create a mood of enchantment and romance as Rapunzel meets her true love and is rescued from her tower with help from the audience.
It is a delightful experience the entire family will enjoy and remember!

This week, Rapunzel is at the Cape Cod Melody Tent on Wednesday, August 6th and at the South Shore Music Circus on Thursday, August 7th!