An exciting opportunity has come up for Kaleidoscope Theatre’s own Artistic Director, Tommy Iafrate! In the past, Tommy has worked as a musician for Royal Caribbean, International aboard their cruise ships, where he has played the saxophone, clarinet, and flute. Royal Caribbean recently contacted Tommy in regards to their brand new ship, the Liberty of the Seas, and asked him to be a part of the ship’s premiere company! This ship (along with its sister ship, the Freedom of the Seas) holds the title of world’s largest ship, and boasts such amazing features as an on-board ice-rink, a rock-climbing wall, and the FlowRider. As this is a brand new ship, the employees will be flying out to Finland (where the ship is built) and touring in Europe before heading back to the Caribbean for the busy summer season.

We here at Kaleidoscope could not be happier for Tommy, and feel that this is too wonderful an opportunity for him to pass up. Furthermore, Tommy will be gaining experience and expertise working on Royal Caribbean’s world-class production shows that he can bring back to Kaleidoscope upon his return in the fall. As this would take him away from Kaleidoscope for the summer however, it means that we will need an Acting Artistic Director for the interim while Tommy is gone. Fortunately for us, we have a very talented individual, Frank Galligan, who has worked for us since he was young enough to play a mouse in Cinderella! He will soon be graduating from Assumption College, and has built himself quite an impressive resume over the years. Frank will assume the role of Kaleidoscope’s Acting Artistic Director for the summer of 2007.

We wish Tommy the best of luck on the ship, and look forward to updates from him while he is away!

Posted by Kaleidoscope Theatre at 4:20 PM No comments: Kaleidoscope Theatre would like to thank Molly Rodman for her wonderful work on the upcoming “Cinderella’s Holiday Ball” coloring book project! The coloring book, along with a corresponding music CD, should be on sale this coming holiday season at the Kaleidoscope Theatre concession stand and CVS stores nation-wide! Between now and then, we plan to release 'sneak peeks' of both the coloring book and the CD here on our blog and on our website. This is a sample of Molly's amazing line-art! Let us know what you think by posting a comment on our blog or by e-mailing us at kaleidoscope@kaleidoscopetheatre.com!
Posted by Nicki at 1:28 PM No comments:

Kaleidoscope would also like to thank Russ Martin from Viscount Studios.
He was instrumental in making the CD recording process go as smoothly as possible. For anyone interested in more information about Viscount Studios, which is based out of Cranston, RI, check out www.viscountrecords.com!
Posted by Nicki at 12:08 PM No comments:

We have announced our 2007 summer schedule on our website! Check it out, and see if your favorite fairytale is coming to your local theatre!
Posted by Kaleidoscope Theatre at 2:44 PM No comments: 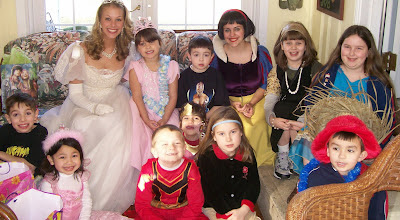 If you are looking for a creative and fun event to plan for your child's birthday party, then Kaleidoscope Theatre just might be the entertainment you've been looking for!

What could be more exciting to a child than having Cinderella herself stop by to say "Happy Birthday!" and play games with your guests? Or how about having a tea party with Alice and the Mad Hatter? Maybe the handsome knight Prince Stefan can teach your guests about the bravery and chivalry of the code of knighthood!

We have a variety of packages detailed on our website. Take a look, and let Kaleidoscope Theatre help create a birthday party that they'll never forget!